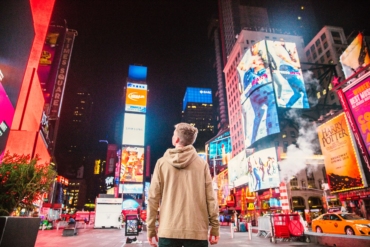 Blockchain is the name given to the digital ledgers that record the transactions and ownership of Bitcoin and other cryptocurrencies. The blockchain is an endlessly growing sequence of connected blocks, each encrypted for privacy and decentralized across multiple computer systems. This makes it much more secure than traditional banking ledgers that could be compromised if someone broke into the centralized database. And now, it’s poising to make a big change in the world of digital marketing as well. Here are some ways blockchain tech is likely to disrupt digital marketing in the next few years.

While e-mail marketing is a cornerstone of online sales, the number of emails digital marketers send out has become unmanageable. This has led to a reduction in the efficacy of email campaigns, as people tend to ignore most emails unless they come from a personal contact. Blockchain could help. Some are suggesting requiring a tiny microcharge to send out a marketing email, which wouldn’t dramatically affect the budget of marketing departments. Though, this would seriously hinder spammers who send out billions of messages. With these sources of spam gone, actual email marketing could rebound in a big way.

Video content is already seeing an impact from blockchain. Many producers are using cryptocurrency transactions to ensure the work they produce is not stolen. Furthermore, blockchain could allow producers and their clients to track and verify the delivery of commissioned content, reducing misunderstandings and foul-ups in the content delivery process.

Cutting Down on Advertising Fraud

Bots unload untold terabytes of fake and misleading advertisements onto the web every year. Some estimates say this costs unwitting consumers billions of dollars. Using a blockchain platform for display advertising could make the ad-hosting process more transparent. In turn, this would reduce the bot-generated display ads and will put genuine content in a more prominent position. The increased transparency could also reduce the amount lost by companies duped into paying for ads by fake companies. People could use the blockchain to verify transactions and recipients.

The phenomenon of the fake influencer is exploding as influencer marketing is becoming a more popular method for brands to connect with their target audience. Shady parties create accounts with large numbers of fake followers, then sell their influence to unwitting companies despite having no legitimate engagement to offer. Blockchain could enable companies to easily assess whether someone’s followers are real people or bots, eliminating fake influencers.

The Data Overload Will Increase

While blockchain offers the capacity for anonymity, it also offers the potential for a new degree of personalization. It could do this by opening up new levels of specificity for targeted advertising. You could surf the web with a unique encrypted signature, allowing websites you choose to record your activity, and also pitch your products with a basis on your browsing or your preferences. Obviously, brands are champing at the bit to get hold of this data, which could make the web’s social graphing functionality far more productive.

Blockchain tech has applications in many industries outside of banking, from insurance to elections, to supply chain management. Digital marketing is just one field it’s likely to disrupt. Link into the future!