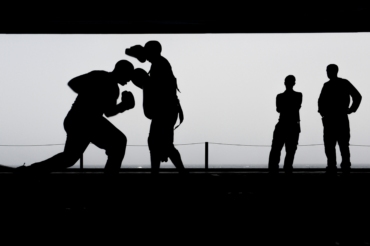 For those always doubting the penetrative power of blockchain, here is another shocker for you: cryptocurrency has entered boxing. Yes, blockchain technology announces itself in the boxing ring with a sponsorship agreement between Amir Khan and investment specialists Cryptech. Of course, Amir Khan has forged a radiant reputation for himself and is no common pugilist. A reputable former British champion, Amir Khan furiously punched his way to success.

Cryptech as well has made a name for itself in the blockchain niche, dishing investment opportunities to institutions and individuals with an appetite for blockchain. Aside from being a heavy trader of Bitcoin (BTC), Ripple (XRP), Ethereum (ETH), and Litecoin (LTC), Cryptech relishes the gamble of investing in blockchain startups.

The exciting sponsorship deal, which marries blockchain and boxing will spread through three fights. This partnership comes as the world hungrily salivates for the September 8th welterweight match between Amir Khan and Colombian Samuel Vargas, with the fight taking place in Birmingham, UK. According to The Gulf Today, Cryptech announced this sponsorship deal from its Dubai office.

A Lion Coming Back to His Den

For sure, this blockchain collaboration is going to be a big boost for Amir Khan. It will be his first return to the ring and his first fight in a remarkable 3-year vacation from boxing. Having energetically sliced himself back to an impressive 147lbs, Khan will be hoping to marvel us with those amazing fists that won him the sparkling WBA (consequently Super) title in 2009, retaining it until 2012. That was in addition to the IBF title he added to his trophy chest in 2011.

Khan is not planning to return to the ring in an over-sized bag of flesh. Working under legendary trainer, Joe Goossen, Khan is furiously cutting his weight back to size. Now that the Colombian Samuel Vargas knows who will be his opponent, it will be far from an enjoyable stay at the Ibiza resort.

In the same fashion, Khan is beaming with enthusiasm about the coming match and his sweet partnership with Cryptech. He yet ambitiously hopes to be restored to the cozy palace of the world’s top rankings. In his words,

“This is a very significant fight for me because 147 is my preferred weight and I want to climb back up the world rankings. I’m very happy to have the backing of Cryptech, a company which has set its own high standards and targets and wants to establish its position at the top level.”

Well Khan, we hope you succeed as the cryptocurrency community cheers you on!