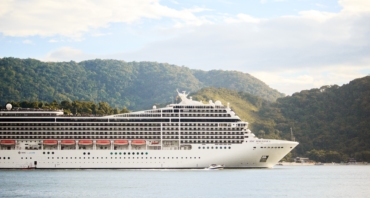 Ever since the controversial hard fork, many people have argued vigorously about the future of Bitcoin (BTC). Soon, two famous leaders in the blockchain space will meet to hash out their differing opinions. They are Roger Ver, the Bitcoin Cash (BCH) evangelist, and the popular Bitcoin writer, Jimmy Song of “Offchain.” They have held many public debates about Bitcoin Cash in early 2018. Now, they will repeat the debate at the CoinsBank Blockchain Cruise on the Mediterranean Sea, September 7-11. This will be the third in the series of this public debate.

Song and Ver will meet to discuss Bitcoin Cash, a hard fork of Bitcoin, according to the latest tweet by Bitcoin[dot]com. Consequently, the name has stimulated hope, fear, and criticism resulting in its sudden increases and decreases in profit in 2017.

The idea behind the creation of Bitcoin Cash was to fasten the verification process and address the scalability problem with Bitcoin. Bitcoin Cash increased the block size to 32MB with an adjustable level of difficulty, and without considering the number of miners supporting it.

Song asked Ver questions about Bitcoin scaling in an interview in a Youtube livestream. Ver responded that the decentralization of the building team really increases the security of Bitcoin Cash by stripping the power from a central authority. He, however, suggested that the increasing transaction costs of Bitcoin will make the currency obsolete.

He tweeted last June that:

“If you think BTC with its full block, high fee policy will be able to maintain market share, you are mistaken. It won’t and it’s time to move on to other things.”

On the hand, Song hopes that any expected significant change desired can take place within the cryptocurrency – Bitcoin. He made this known in an article published by Medium prior to the release of Bitcoin Cash on August 1st, 2017. Furthermore, he stressed the fact that Bitcoin Cash is still surrounded by a lot of uncertainties and says:

“One thing is for certain: if you want to maximize your holdings, it’s in your best interest to get your Bitcoin off third-party services and control your own private keys before August 1st.”

The Outcome of the Debate….

LIt would be interesting to see how the debate unfolds and if Song prevails over Ver. However, Bitcoin Cash is not fully established in the minds of the cryptocurrency community for now. Let’s wait and see how things play out.